It took us a long time trying to find the perfect deal on an all inlcusdive girls holiday and eventually we decided on Crete. I’d heard a lot of good things about Crete and how beautiful it’s supposed to be so I was very excited to visit Heraklion. We booked our holiday through Love Holidays and flew with Jet2.com from Manchester Airport.

I love going to the airport and flying. However, on this particular trip, it all changed. When we boarded our Jet2 flight, the air conditioning had broken and the plane felt like the SUN. Everybody was sat sweating and couldn’t breathe, it was that hot. We were told that once we got up into the sky then the air con would work. We sat on the plane for one hour before we were told that we were being sent a new plane to board. The Jet2 staff were really good and kept coming down the plane with water. I just think everyone got a little bit cranky from feeling like they’d been on fire for the past hour and the mood on the plane was not very nice.

We eventually got off the raging inferno and waited another hour before we finally boarded a new plane to Heraklion. This time the plane was too cold, but who I am to complain?! We finally landed in Heraklion and caught a taxi to our hotel. The taxi drive was only 15 minutes and didn’t cost much. We stayed in the Hotel Marilena in the Andrea Papandreou area of Heraklion. Our first impressions of the hotel were good and the guy on the reception opened up the restaurant and gave us food. Winner! We then went up to our room to finally go to bed after a very long day. There were three of us on the trip and in the room there was one double bed and one sofa with sheets on. WOW. Welcome to my week of sleeping on a sofa and not being able to breathe due to the room air con not working as it should.

The weather in Crete is normally around 27 degrees in July and the currency used is Euros. 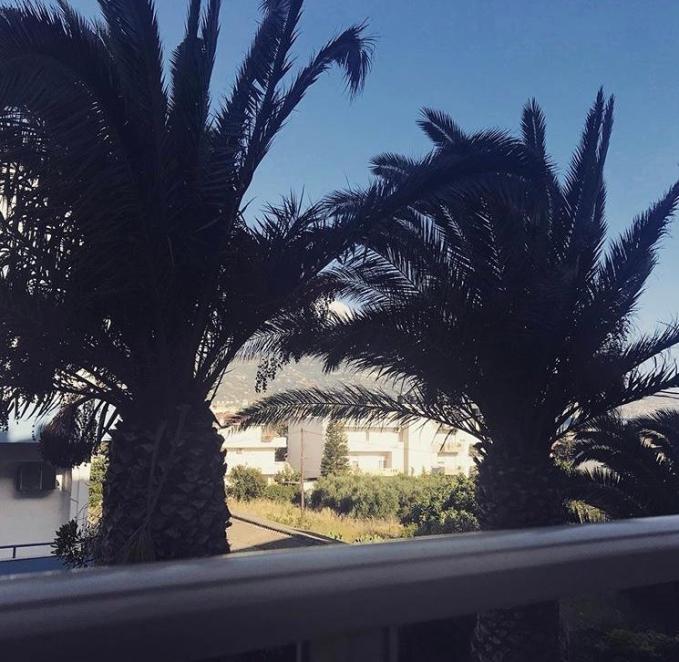 Our first day started with a lazy day around the pool. The pool area of the hotel was ok and there was also a little snack bar which provided us with many, many crepes for the entire holiday. We decided before we went on the trip that it was going to be a relaxing and chilled holiday. So we definitly made the most of our week by the pool and at the beach. Also, the island was having a heat wave at the time we went and the temprature was over 30 degrees for the entire week. Lets just say we all came back with tan lines, we still have now a few months later. I don’t think they will ever fade.

My friend made a HUGE mistake of putting plasters on her arm (don’t ask) and didn’t think about what might happen when getting a tan. Talk about an Inbetweeners holiday…she ended up with a weird mark on her arm that resembled something that shall not be named. Hilerious.

We were the only English people in the hotel, as it seemed to be the holiday destination for Russain families. On one night my friend decided she needed some water at 3am and went downstairs to ask reception. They allowed her to go into the restaruant (in her pyjamas) and she was greeted by a table of Russain men playing cards. It was safe to say, my friend never got a glass of water so fast!

That same night we had decided to make good use of the all inclusive bar and headed down the road to a local club called ‘Senses’. There isn’t much to do around the hotel and this seemed to be the only decent place to have a few bevvies in the area. We had a good few nights in Senses and danced the night away with a lot of free shots from the bar men. It’s only a small club but the staff are really friendly and it has a great atmosphere when it gets busy. Ohhh and you’ll also get your ‘5 a day’ here, as they give you a lot of free fruit and popcorn. The few memories of Senses Nightclub I have involve dancing away, necking copious amounts of popcorn. 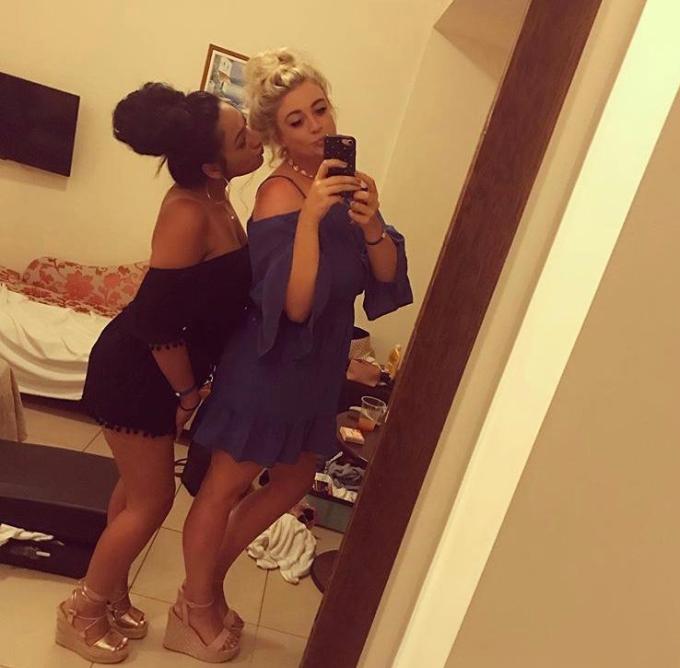 We went to Senses a few times over the week and on one occasion on the walk home (which is around 20 minutes) we were greeted by a little puppy we called ‘Frankie’. Frankie stole my heart. I was googling how to get him back to the UK. I asked every person on the walk home if they would take him. Nobody would. Frankie followed us all the way back to the hotel and came into the reception area. The recetionsist decided to shut him out. It was way too sad and I didnt like it. I did notice that there were a lot of stray cats and dogs in Crete. It broke my heart.

The next day the sun had taken it’s toll on my friend. She was as red as a lobster. We were actually quite worried at how sunburnt she was, lets just say she had to stay in the shade for the rest of the holiday. We decided to take a walk down to the beach, which was only a ten minute walk from our hotel. The beach was ok. I’ll be honest, it wasn’t the best beach i’ve never been on, as the sea was filled with grassy bits. However, this didn’t stop us sea queens! Straight in the water, bombing it in the waves singing our little hearts out.

A bit further up the beach you’ll find a water sports area where you can book to use banana boats and jet skis. I have never, not once in my life, ever been on a banana boat. Today was that day. My friend told me that they will keep going around on the sea until you fell off. This made me feel nervous. Also, I had eyelash extensions put on before we came away and I was worried I would have non left after the ride. Well, it started and as I predicted, I couldnt see. My eyes were stinging and my friends were laughing at the pain on my face. However, I had such much fun, I want to do it again.

We looked at day trips and things to do whilst in Crete at the local tour shop. We were going to go to Malia for the night (but we ran out of money and I’m too old these days) and we also thought about going to ‘the pink beach’. However, we settled on catching a taxi to ‘Watercity’ – Water Park. My friend had taken a number from a taxi man, who we nicknamed ‘Raxi the Taxi Man’ and he gave us a deal to and from the water park. The drive took about 25 minutes and the water park cost around 23 euros. The water park was good and worth a visit for a bit of fun. Just watch out for a memeber of staff who tips you over on your rubber rings!

On one occasion we went into Heraklion centre. We saw the Old Venetian Harbour and walked up into the centre, which was really beautiful. There are many places to eat in the centre and the streets are lined with restaurants and cafes. We did struggle to find any clubs and places to drink in the centre. However, we did find the best greek takeaway restaurant and had some bangin’ gyros. The best in Herkalion. This place is called Izmir Kebap. Furthermore, the other best place for gyros was the snack bar at the hotel. We nicknamed the moody gyros man ‘salt bae’. He did have a good way of putting salt on the gyros. 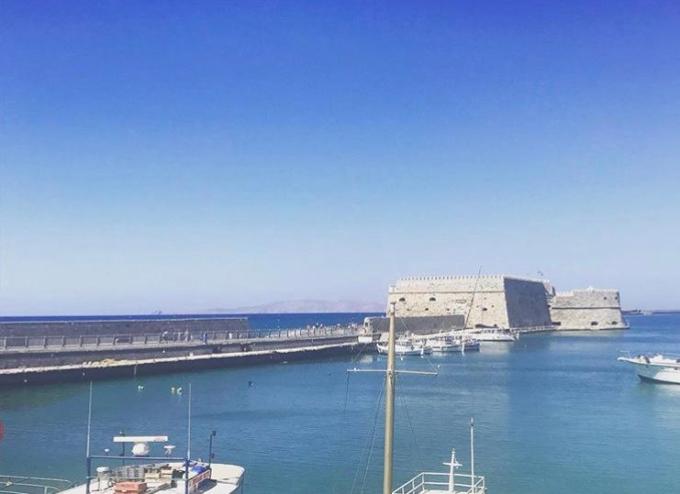 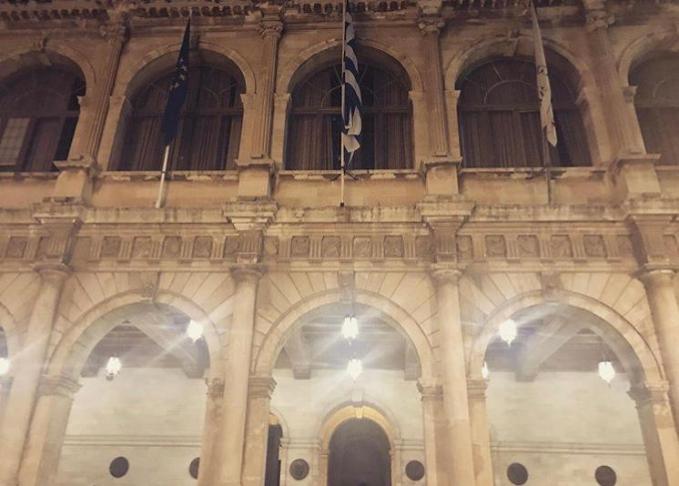 On one night we decided not go out and had a chilled night down at the beach. This was our favoruite night. It was pitch black and all you could see were the stars and the planes taking off from the airport flying over the sea. We laid on some sunbeds from a nearby hotel, had some drinks and played music. We listened to the sea, chatted and laughed the night away.

If I went back to crete, I would choose a different area. We had good time and such a funny week. However, there wasn’t much to do in the area we stayed in and I had to sleep on a sun lounger by the pool, as I couldn’t breathe in the room as it was too hot. However, I could easily live off gyros and you know you’ve lost the plot when your mate brings Zloty’s to use thinking they were Euros and tries to spend them on the plane on the way home. Thanks for a brilliant holiday girls!

Until next time Crete…