We were bored one day and decided to book a week away somewhere we’d not been before. So me and my sister had a look on Jet 2 Holidays. We found a deal with flights, hotel and transfers for around £450. We decided to go to Limassol in Cyprus.

Jet 2 Holidays were great all the way through our holiday. They provided a great service and we even received a little message half way through the holiday from a Jet 2 Rep. 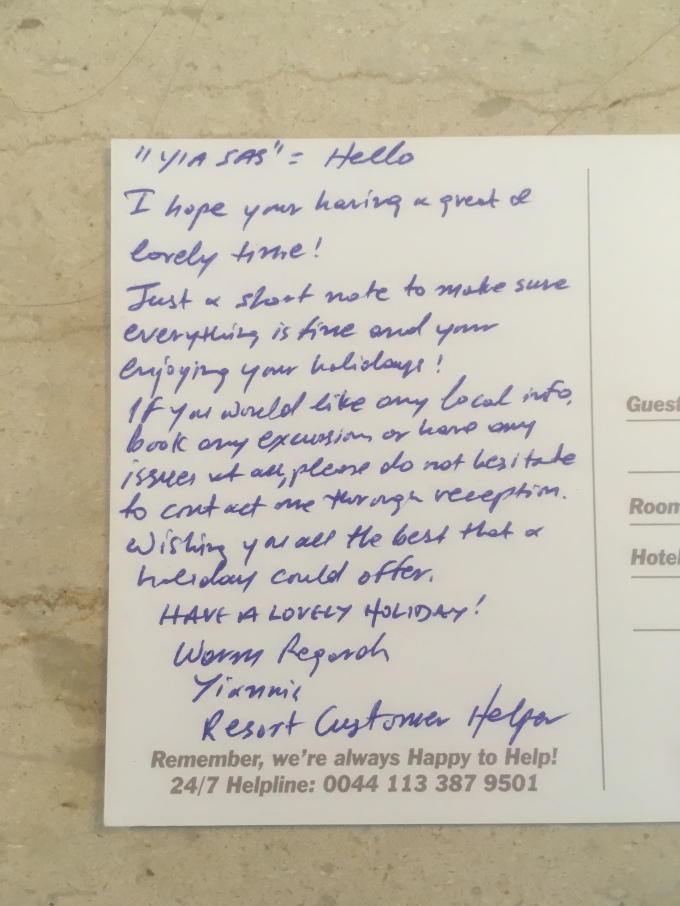 It all started at Manchester Airport at the checking in desk for Jet 2 Holidays. The friendly staff welcomed us and we were ready to fly to Cyprus. The flight to Cyprus is around 5 hours and after a long and slightly bumpy flight we landed in Paphos.

The currency in Cyprus is Euros and the best time to visit is from May to October with highs of 26 degrees.

When we landed we found the Jet 2 desk and we were informed that instead of getting on a coach, we had a private transfer taxi with two other couples. I was glad as I hate coach transfers!

The taxi took around 45 minutes to get to Limassol and we were dropped at our hotel. The Mediterranean Beach Hotel. It was quite late on (about 21.00) and we were shattered. Our first impression of the hotel was WOW. This hotel is lovely. It was big and modern. We had a lovely room with a balcony and we were pleased that we had booked this hotel. We had a quick change of clothes and set off in the dark to try and find some food.

We ended up walking down the road and stumbled on a Italian Restaurant. There was no one in it and I thought screw it…I was hungry, let’s try it! It was the best Italian food I’d ever had. I had creamy mushroom pasta with garlic bread and we even got free soup as a starter. It was a great little find.

The following day we thought we’d have a look around Limassol. We asked at reception how far it is to walk to the centre. The woman at reception went “it’s very far”. We had all day and thought let’s do it, let’s walk. We went down to the beach at the bottom of our hotel and started to walk along the beachfront path into Limassol. This was quite possibly the longest walk of my life. We walked past loads of other hotels. The hotel next to us was the Four Seasons (very posh) and many others on the way. The bricks on the walkway were loose and there was a fair amount of litter which wasn’t nice. However, we later found out that there had been extreme flooding literally a few hours before we arrived on the Saturday. So this explained a lot. 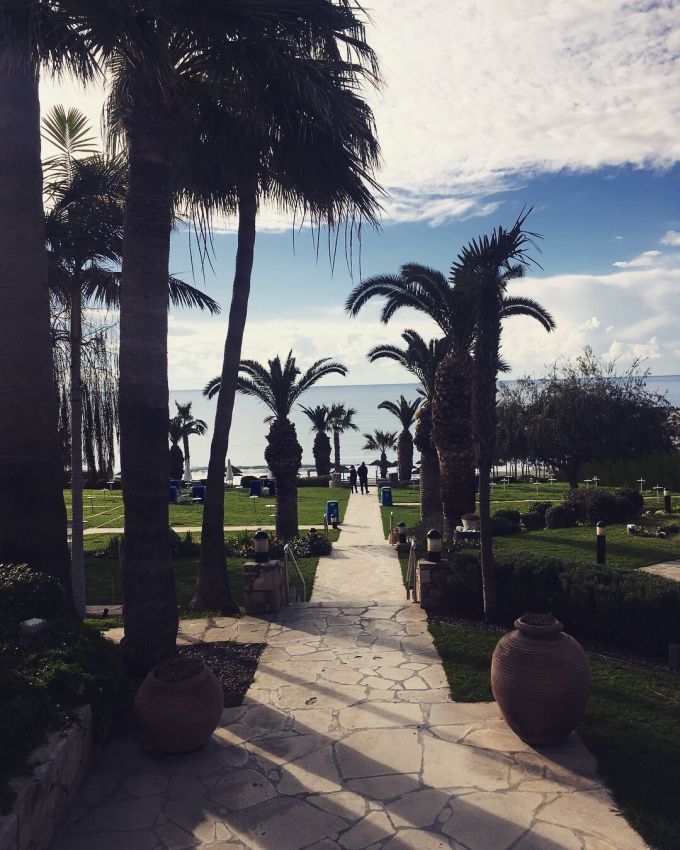 Two hours and 7 miles later. We finally arrived in Limassol centre. It was the longest walk of my life. My whole body was aching!

We stopped for a quick latte in a cafe and I kept saying to my sister that there is supposed to be a lovely Promanade somewhere nearby and we had to keep walking. Eventually we found it. It was really busy as all the locals come out on a Sunday with their families and have a walk down by the beachfront. The promenade also leads you down to Limassol Marina. This is also a nice area with shops and cafes. 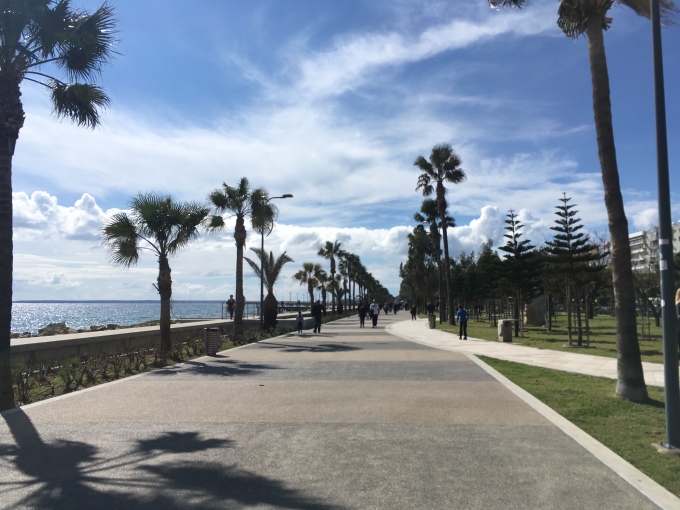 It was around midday and we stopped for some food overlooking the marina at a restaurant called Ventuno. This was a lovely place and I ordered a fabulous salad. Although, the service wasn’t great and we had to wait awhile to order, I would still recommend to go as the food was delicious.

When we finished our dinner we had a quick look around some shops that sold olive oil and other local gifts. I randomly bought some volcanic soap. LAVA SOAP! We didn’t want to walk all the way back so we headed to try and find a taxi. This proved really difficult. We ended up trying to flag one down. We later learnt that you often have to flag taxi’s in Cyprus. The taxi cost us around €10 back to the hotel. There is a bus route that is really cheap that goes from the hotel to the centre, we just couldn’t be bothered to use it when we felt that tired.

The hotel was great. It has an amazing outdoor and indoor pool. Unfortunately, the weather wasn’t hot enough to heat the outdoor pool and we ended up spending most of the time in the indoor pool. The hotel also has a spa attached and we were able to use the jacuzzi and sauna. The jacuzzi wasn’t great but it was free to use, so check it out. 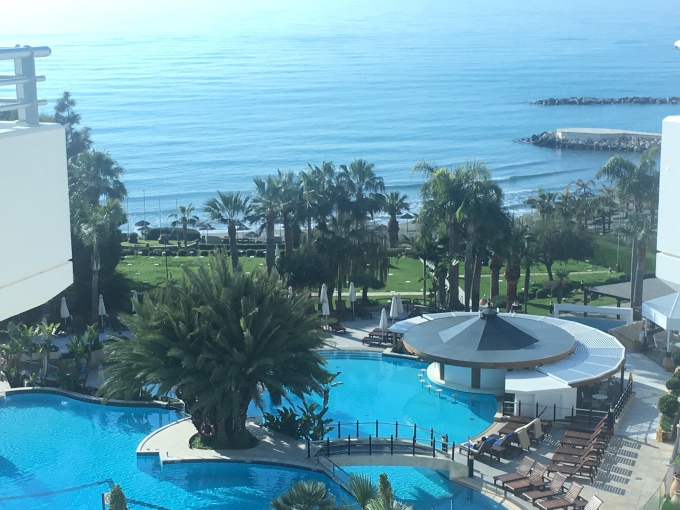 The hotel also has a few restaurants inside and our favourite was Shumi Sushi. The decor was beautiful, the food was amazing and the service was exceptional. We went back twice! It was that nice. We had some lovely avocado sushi rolls and deep fried chicken.

On the next day we went back into Limassol to have a wander round the Old Town. This time we decided not to walk in and caught a taxi. The Old Town was lovely. We walked in the grounds of an old medieval castle with Greek ruins and had a look in some local shops. We then sat in a bar in the square and had a drink on a swing bench. We spent a few hours here in the sun, swinging on the bench. The bar was called The Spot. 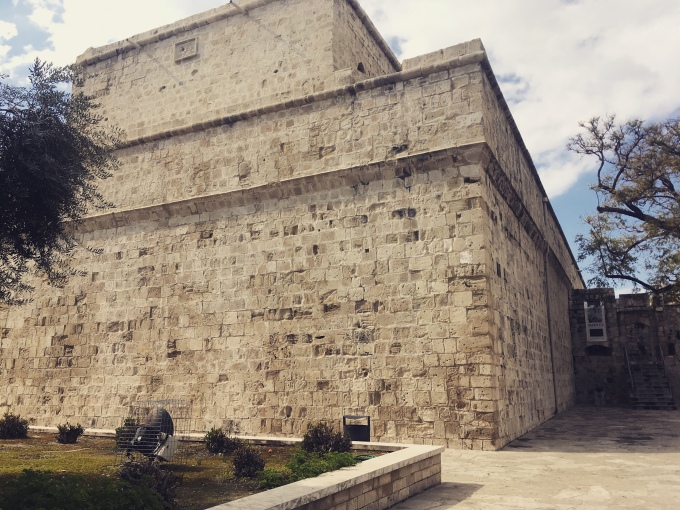 In the evening we needed to find a restaurant to have tea. We walked from the hotel down the road and again found an empty Greek style restaurant that looked quite funky. It was called Kissos Taverna. We went inside and again we were the only people here and we were sat next to the biggest fish tank I’ve ever seen in a restaurant. It was crammed full of small fish and big fish. I had a Greek salad and it was just what I needed. The whole place was decked out like you were sat in an outside Greek square. Afterwards, we walked back up to the hotel and on the way found a pub called Trippers. We sat at the bar and drank a lot of wine. Hiccup!!

The next day was spent as a day chillin’ by the pool. The weather hadn’t been too bad so far. It was around 17 degrees and quite sunny. There were another couple of other people that had the same idea. We laid on a subbed and read our books. Just what the doctor ordered. We also went across the road and found a little shop that sold excursions and we decided to book a trip from Kourion to Paphos.

The excursion company we booked through are called Ascot Tours and they were fabulous. The tour lasts the full day and costs around €45. The tour bus picked us up at around 8.00 in the morning and our first stop was the Kourion Archeological Site. The site was great and you got to see some fanatic ruins and mosaics. You were also shown round by a local guide. 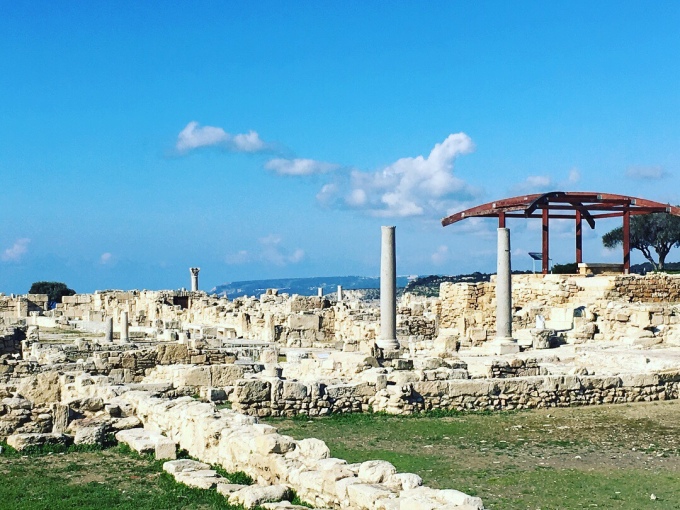 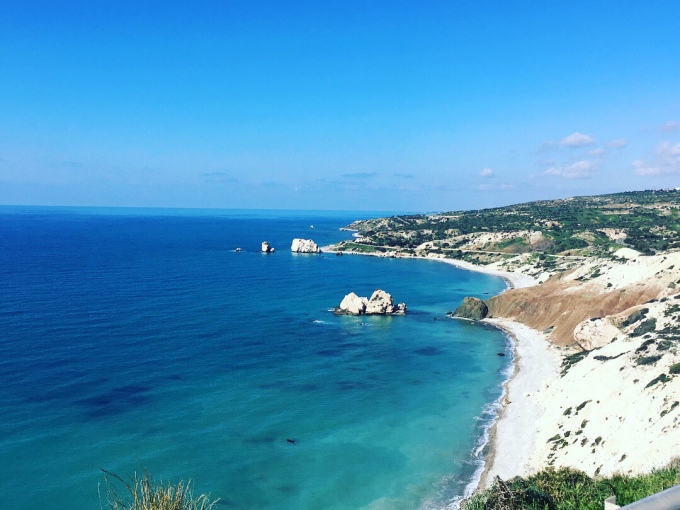 On the way into Paphos we also stopped at a sweet shop that sold Loukoumia (Turkish Delight). YUM!

The Pillars of St Paul and a catacomb in Paphos…

The last stop was the chance to look around Paphos. We headed to the large archeological site and saw some of the best mosaics in the world and went for lunch at a restaurant on the marina. We even saw a Pelican… 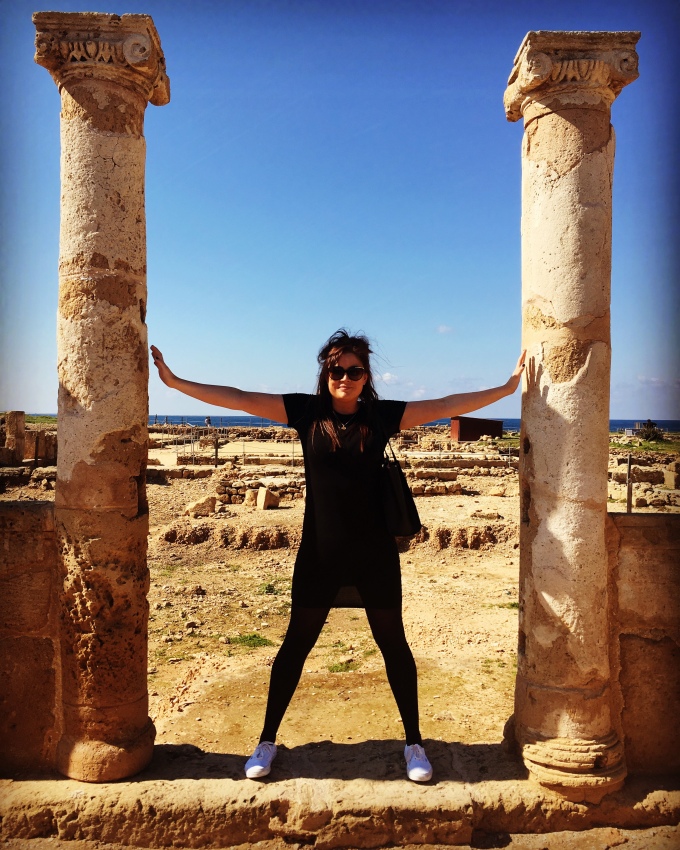 The tour was fantastic. You had a lot of time to explore and you didn’t feel rushed. Our guide Chris was also great. He was knowledgable and funny which made the day even better. We decided to book on another excursion through Ascot Tours to visit Nicosia and Larnaca.

Nicosia to Larnaca was another great tour. We had the same guide, the lovely Chris that picked us up in the morning and we headed to Nicosia. Our first stop was the Archbishops Palace and a little Folk Art Museum. 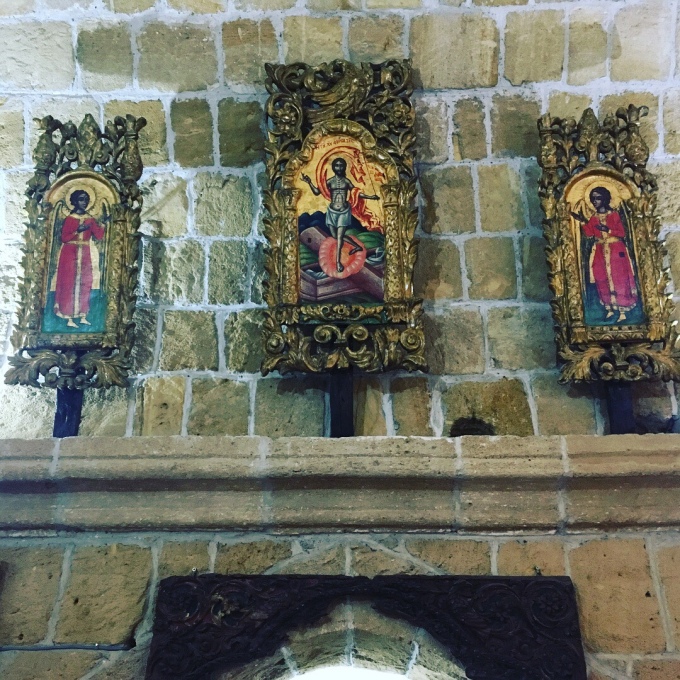 We then headed into the centre of Nicosia. If your being your passport with you, you can walk over into Turkish Occupied Cyprus. Which we did. You’ll pass through the UN Buffer Zone and you’ll get to see a little bit of the Turkish side. We only spent ten minutes here as there isn’t anything to do, but worth the visit to say you’ve been. Afterwards, we paid a couple of euros to go up an observatory and take some pictures. This is well worth a visit to see a fabulous view of the city. You might also see the Turkish flag on the mountain side.

Next stop on the tour was Larnaca. We took a stroll down the famous palm tree lined beach front and had a bite to eat at a restaurant overlooking the beach. We then walked up to the Church of St Lazarus. This church is incredible. The decor was beautiful and you can also go down into the tomb. 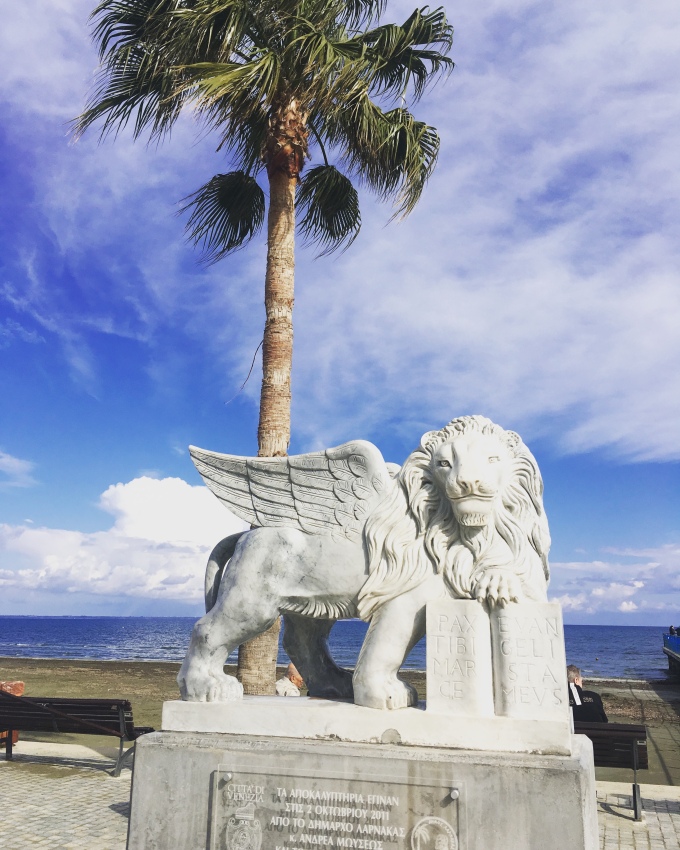 We had an amazing day and if you are staying in Limassol. Make sure you choose Ascot Tours for any excursions. They are amazing!

If I went back to Cyprus I would stay in a different area as the hotel was amazing but it was a little bit far out from the centre. However, we ate some amazing food, saw some fantastic ancient sites and met some great people.

Until next time Cyprus…